the 16 Patton Show in Asheville 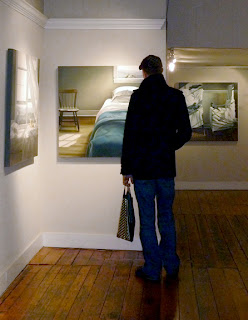 Patron checking out Forgotten Dreams
This past Saturday evening we attended the opening night reception for Karen's group show at the 16 Patton Gallery in Asheville, NC. Her work was presented along with that of Karin Jurick and Suzy Schultz. We headed up mid-morning which, entirely by chance, coincided with the departure of Karin Jurick, and we wound up playing an impromptu game of tag as we passed each other periodically on the drive up.

Standing by Stand Off
The weather was absolutely perfect that day, and the city was saturated with tourists. We were all staying in the Haywood Park Hotel in the center of town, and arrived there simultaneously. Our room wasn't quite ready, so we dumped our bags in Karin's room, and headed out to find a place for lunch. Our first two choices had long waits, which was fortuitous because we discovered a wonderful mediterranean restaurant called Jerusalem Garden Cafe. We lingered there as long as we could, but the show was to begin at 5 pm, and we needed to return to the hotel and prepare for the show. 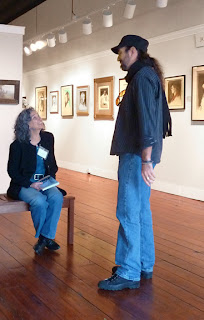 Karen talking with Douglas Hoover
Receptions usually take a little while to heat up, and there were only a few visitors present when we arrived. One of the first people to walk in was Douglas Hoover, an artist and graphic designer from North Carolina. Doug was a really nice guy, and we all had great time talking with him. As the evening progressed the gallery began to fill, and soon it was buzzing. Suzy was in Los Angeles, but the two Kare(i)n's were busy most of the night discussing their work with enthusiastic patrons, while I recorded the event on film. 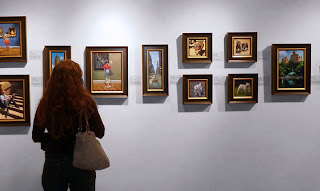 Gallery goer admiring a portion of Karin Jurick's wall
Early the next morning we shared a wonderful breakfast with Karin at Restaurant Solace, then packed up and headed back to Atlanta. The weather was great, the mountains were beautiful and we had a collection of Richard Matheson short stories playing on the iPod. It made for a delightful ride home.

Posted by James Neil Hollingsworth at 10:18 AM

The photo of the person admiring Karin Jurick's paintings could be taken from one of Karin's museum series! :-) Life imitates art?

Thanks for the photos.

Hello, I truly enjoyed reading your post. I found your site from Bing. Will bookmark to return later. Thanks!
Paintings

As the evening progressed the gallery started to fill, and quickly it absolutely was buzzing.

How can we get the best Gold WOW,through the internet or the players in the game? Can we Buy Gold WOW with cheap price or other ways else?