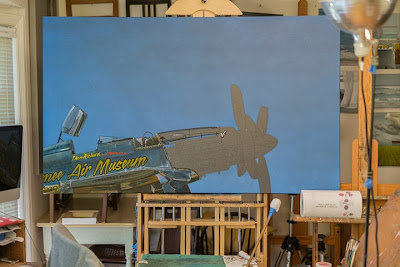 Slowly inching towards the nose. I'll be starting on the exposed engine today, making my way up to the prop. The engine . . . definitely the scariest part of this painting. Wish I could fast forward to my next post to see how it turns out.


Posted by James Neil Hollingsworth at 10:23 AM 1 comments


I made a wee mistake in my first post of the "in progress" image of Precious Metal. I wrote that the dimensions were 30 x 60, when in actuality they are 36 x 60. Ooops. So, this is the canvas at the end of day six. I'm slowly laying in the first rough layer of color. I've also been adding in some panel lines that got lost and refining much of the type. I'll probably post the 3rd progress shot once I reach the engine. Be back in a few days.


Posted by James Neil Hollingsworth at 11:32 AM 2 comments

Precious Metal - Day One and Dinner with Terry Miura


I've been gradually easing into my next painting. It's a 30 x 60 painting of a modified P-51 from the Reno Air Races I attended last September. I think it's fitting that I got started just as the 2013 races began this year. This is posted as "day one" but it's actually a couple of days into it. I've been refining the drawing, laying in the type and at this point I'm masking off the aircraft to lay in the first pass of the sky. This is one of my favorite planes that race at Reno each year. It's named Precious Metal and it's all bare metal. Lots of shiny in this one. The engine cowlings are off in the composition revealing the engine, so with that and all the reflections there's a lot going on in this piece. As always I'm freaked out by the complexity of what I've taken on, and am having doubts about my ability to achieve what I'm after here. But, I'm in it now . . . . This painting will probably take some time so there will be a number of these in progress shots.

We also had the pleasure of having dinner with Terry Miura the other night. He was in town giving one of his workshops and contacted us and Karin Jurick to see if we could get together. Fortunately we all managed to find time to meet at the OK Cafe on Sunday evening. Sitting around eating good food and talking shop. It was great. We've already planned to meet again the next time he's in Atlanta.


Posted by James Neil Hollingsworth at 11:09 AM 2 comments

Karen and I got back from out trip to Cape Cod and New York a couple of days ago. We went up there to attend the opening night reception of our two person show at Tree's Place Gallery in Orleans. In our 30+ years together this was our longest trip away from home. We took two days for Cape Cod and then added another four days in New York.

The first day on the cape was spent mostly just getting there. We did stop by the gallery then we checked into our B&B and headed out to the beach. After cleaning up, we went to our favorite place to eat. A restaurant specializing in South African cuisine, with really great vegetarian dishes called Karoo Cafe. The last time we were on Cape Cod the Karoo had a single location in Provincetown, but this year they had added a second location in Eastham. Which just happened to be where we were staying.

The day of the show was spent entirely in Provincetown. A visit there is always on our to-do list when we go to the cape. Lot's of galleries and of course the Karoo Cafe. Our friend Johniene Papandreas has a gallery there called Gallery Voyeur, and it was really nice having time to visit with her. After a full day of visiting galleries we finally had to leave to get back to Orleans in time for the opening of our show.

When we arrived people had already begun to show up. A good sign. I was really happy to see our friends Sue and Steve Zafarana. They are type designers and artists and I love that they take the time to come to my shows.

I think it's safe to say that the show was a success. The gallery space was nearly full the entire evening with enthusiastic art lovers, and by the time the doors closed we had sold seven paintings between the two of us. Donna, the owner, Julie the gallery director, Karen and I were all pretty pleased and went out to eat after the show to celebrate. Karen and I had to make it an early evening because we needed to catch the 8:45 train to New York from Boston the next morning.

We got to the train with time to spare and the ride in was pretty nice. We got to our hotel a little early, and they didn't have any high rooms with a view, so we met my brother Doug at the pier near 29th street and had a drink and relaxed until more rooms came available. A couple of hours later we returned to the hotel and had a great room on the 22nd floor with a wonderful view of lower Manhattan. We all had dinner that evening at a very nice vegetarian restaurant called Blossom then called it a night.

The next morning we met up with Doug and had breakfast at the Chelea Cafe before heading up to the Metropolitan Museum of Art. I just love that place. As always there's never enough time to see as much as you'd like, but we got in about five hours. When we left the Met we walked to the Guggenheim to see the James Turrell exhibition. Doug and his team had spent a huge amount of time working out the mechanics of the exhibit and constructing the installation and he was anxious for us to see it. The crowds have been huge for this exhibition, and it was really nice getting in through the back door with Doug. I felt a little guilty at first, but that faded pretty quickly. Before we entered the rotunda I thought it was just going to be another light show, but it was much more than that. It's really impressive.

We finished up the evening with dinner at the Lightship Frying Pan back at Pier 66 where we had had a drink the day before. It was a beautiful night and we stayed there for a very long time enjoying the scenery and the cool night air.

Day three started like the previous two days with breakfast at the Chelsea Cafe. Doug was back at work at the Guggenheim, and our plans were to spend a good portion of the day checking out the galleries in Chelsea. It was still early when we finished breakfast so we walked over to the High Line and strolled the length a couple of times until a little after ten then headed to the gallery district. Our plans were dashed when it seemed that every gallery we came to was "closed for installation". There must have been been a gallery walk planned for later in the week, because a huge number of galleries were closed. I have to say most of the work we saw in the galleries that were open was pretty sad, so in the end the gallery adventure was kind of a bust.

I had purchased a new camera for this trip. I wanted something smaller than my DSLR to walk around with and do some street photography, so I got a Fuji interchangeable lens compact. I also wanted to do some black and white while we were in New York. Something I hadn't done that since the days of film. Hence the black and white shots in this post. It was really fun thinking in black and white again. Since the gallery thing didn't pan out we just walked and shot. Karen bought a new Sony RX100ii for the trip. It's an awesome camera and she got some great shots there. That night we had dinner with Doug at a terrific Chinese restaurant called Grand Sichuan not too far from our hotel and planned the next days adventure.

Our plans were to spend the day walking around lower Manhattan. Karen and I wanted to see Soho, Greenwich Village, Little Italy, Chinatown and the lower East side, so Doug took off from work and we all spent the day walking and taking lots of photographs. 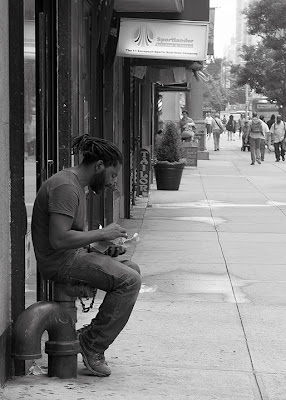 One of the great things about being in a city with someone who's been there for a while is that you don't just pass by structures that have some historical significance. Two of the places that Doug pointed out to us were Jasper Johns studio from the sixties, and the building that is on the cover of the Led Zeppelin album Physical Graffiti.

We had a wonderful time that day. The weather was perfect and we got tons of pictures. Our trek finished up at Washington Square Park. Lots of people and a festive atmosphere. We hung out here for quite a while. At one point we came across a jazz trio playing under the trees which was terrific.

Doug eventually had to go back to work, and we hung out at the park a little longer. After a long rest listening to some really good jazz it was time for us to go too so we walked up Fifth Avenue back towards our hotel. We met Doug one last time for dinner that night then said our good byes went back to our room to pack for the flight home.

It was a great trip. Kind of sad it's over, but it's good to get back to work.