Tamarah Ellen of Tamarah's Closet interviewed Karen yesterday on her live YouTube channel. The inverview runs about an hour and 15 minutes. If you'd like to learn a little about Karen's history, her inspirations and her paintings you can view the video here.


Posted by James Neil Hollingsworth at 10:53 AM 1 comments

Triumph No.2 In Progress: Completed Underpainting

It seems as though I'm making a career out of this latest painting, but it's a bike I've wanted to paint for sometime now and I just want to get it right. The underpainting is finally complete and it's on to the next pass. I hope when this piece is finished I'll feel that the time had been well spent.


Posted by James Neil Hollingsworth at 11:33 AM 0 comments


Last week Karen and I headed to Charleston to deliver 23 paintings to Principle Gallery for her solo show Friday April 7th. It was a really nice drive. As usual we had veganee snacks onboard and and for this trip the Exorcist playing on the iPod.

We arrived around noon, were warmly greeted by Frank, Thomas and Liz, the staff at Principle, and immediately formed a fireman's chain to unload our car. Once the precious cargo was safely in the gallery we all spent some time catching up then Karen and I checked out the current work in the gallery.


We knew that at this moment Atlanta was getting hammered by a terrific storm and it was quickly heading our way, so we dumped our bags and headed out to see the town while the weather was still good. Charleston is such a great walking city, with lots of art galleries. Our first gallery stop is nearly always Robert Lange Studios.  Robert and his staff were preparing their gallery for the Friday opening of Brett Scheifflee's solo show. Brett is a great guy and his work was stunning. The images below don't do his work justice. You have to see it in person to truly appreciate its subtle beauty.


After we had walked around for a while it was time to eat, and for us that always means CO on King Street. CO is this wonderful Asian restaurant that offers this addictive Curry Laksa. They have another location in Charlotte, so when we go there for Karen's show in the fall, we'll be having Laksa again.


After breakfast at Eli's Table (a nice little restaurant right next door to the gallery) the following morning we headed out to the South Carolina Aquarium. Karen's begun to use fish in some of her compositions so it was a must see on this trip. It's a good aquarium and Karen got a couple of hundred photos to work from before we left.

Once we finished up at the aquarium we drove back into town and did the gallery hopping thing, then relaxed on the swing at the Charleston Waterfront Pier. We ended the day with an early dinner at the Brown Dog Deli on Broadstreet. It's a great place to eat with really good vegetarian options and a wonderful hippie vibe to the surroundings.


The next day began with breakfast at Gnome Cafe. Karen and I are always on the lookout for vegan/vegetarian restaurants and this was a real find. Very green, very forward thinking, very tasty and very nice people. In fact halfway through our day we returned for lunch. Side note: I hate Brussel sprouts, but the chef asked me to try a sample of that days Brussell sprouts side item. I held my nose and tried it . . . then ordered it as a side with my sandwich. Delicious.

Fueled for the day we headed out to Sullivan's Island to get in some beach time. We parked next to Fort Moultrie and walked down a sandy path to the shore. The winds that day were practically gale force so walking was a struggle. It wasn't long before our mouths were so full of sand we decided to bale on the beach. On our way back to the path leading to our car we came upon a sea bird laying in the sand near the water. It was alert but didn't move as we approached. We were even able to touch it and realized that it was injured. We weren't sure what to do so I got on the phone and started looking for a "bird rescue" center. About eight calls later I finally found who I was looking for. I described the birds condition and they said they would send someone to come and pick it up. By this time the water was beginning to lap up against the bird so Karen got a beach towel from the car and wrapped it up, and we took it back to our car to wait for the rescue person.


About fifteen minutes later help arrived. The woman said it was a Loon and that they'd seen a number of these birds injured. We thought it may have been hurt during the terrific storm the night before. The woman was very nice, crated the bird and took our contact info to let us know how things turned out. We gave her a donation and she drove away, both of us hoping the bird would be okay. Sadly, we got a call on the phone in the car on the way back to Atlanta from the center and they told us that the bird had died.


Since we were already at Fort Moultrie, and I love me a fort, we did the tour. This was where Edgar Allan Poe was stationed when he was nineteen years old. Cool. The weather was perfect, although like I said very windy. Great for photos though, "severe clear". We walked around and read the plaques. I noticed one strange thing, the flag over the fort was at half staff. I couldn't figure out why so I asked at the visitor center and they said that John Glenn was being buried at Arlington Cemetery that day.


That evening Karen and I went to the opening of the "Homage" show at the Vendue Hotel. We had been to the hotel the day before and met the artist in residence Fred Jamar. An interesting fellow with a good gig. The theme of this show was that artists from various galleries would paint their own versions of classic masterpieces. Our great friend Karin Jurick used Whistlers Mother as her reference and came up with her homage titled "Moms". All of the paintings were very creative, the crowd was large and everyone seemed to be having a good time. A really fun was to spend an evening in Charleston.


Our final day began with a trip to John's Island to see the Angel Oak. Some friends had told us that "you have to go and see this tree", so we did, and it was definitely worth the trip. The tree is claimed to be somewhere between 400 and 500 years old, with an expected lifespan of over 900 years. It's truly spectacular.


While we were there we met an artist painting the tree. His name was Frank De Loach. A very amiable man with an extensive history too broad in scope to list here other than to mention he worked at the Field Museum in Chicago and was involved with the preparation of the Tyrannosaurus Rex "Sue". For an armchair paleontologist like me I thought that was very cool. We talked for a long time and before we left we invited him to Karen's show that night and he said he'd try and make it.

After we left the oak we drove over to Folly Beach. We walked around in the sand for a little while, but like the day before the wind was really strong making it difficult to get around. We eventually wound up on the fishing pier and just admired the view from there.

Our free time was limited that day because Karen's opening was that evening, and we wanted to get in one more bowl of Laksa before we returned to Atlanta, so we drove to our room, got cleaned up and walked back to CO.


A little after 5 we entered the gallery. Frank (the gallery director), Thomas and Liz had done a beautiful job of hanging  the show and there was already a sizable crowd as we walked in. One of her collectors got there early and was anxiously waiting to meet Karen. He was a surgeon, attending a conclave in Charleston, and was quickly running out of time before he had to leave. Fortunately we arrived early enough for he and Karen to have time to talk, and also buy a painting before heading out for his meeting. 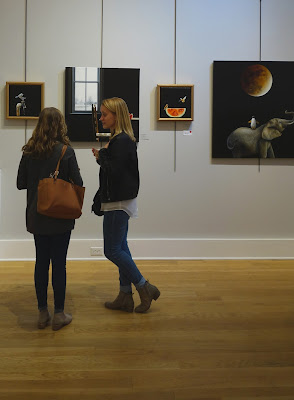 Eric who usually tends the beverages was there again. It's always good to see him. He served drinks while Frank, Liz and Thomas expertly worked the room.


Frank DeLoach, the artist we had met at the Angel Oak that morning did come to the show.


From then on it was more people, more good wishes, more compliments and more sales. When the opening had ended Karen had sold nine paintings. Frank, with his endless sense of optimism, assured Karen that her show would sell out before it's over.


After the show we went back to our apartment and collapsed. Having a solo show is kind of stressful, so we watched a couple of episodes of House Hunters on the iPad then fell asleep. 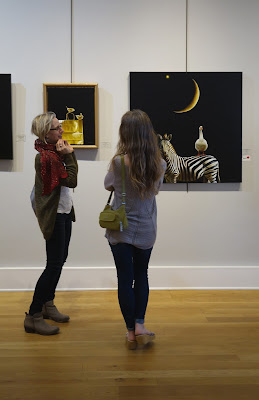 We had already said our good-byes at the close of the show the night before and left Charleston early the next morning. It was an easy ride back and our house still intact when we arrived home. Chalk up another really successful trip.

Triumph No. 2 In Progress 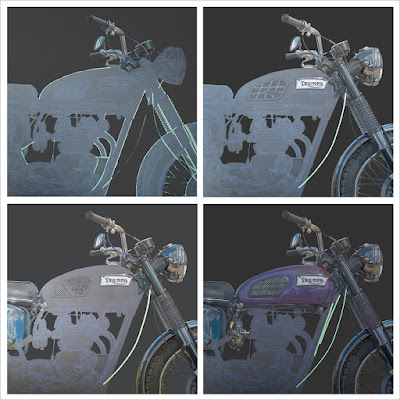 Triumph No. 2 | 30 x 30 | Oil on panel | In Progress
Just a few images of a new motorcycle in progress. Been in the works for a few weeks. Got a way to go just to get the underpainting done. Looking forward to the second pass.

Posted by James Neil Hollingsworth at 11:09 AM 1 comments