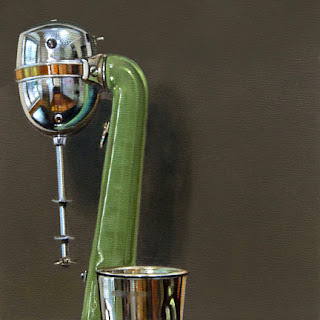 Milkshake | 6 x 6 | oil on panel
Another nostalgic offering this week is this old Hamilton Beach milkshake mixer. To participate in the auction click here. 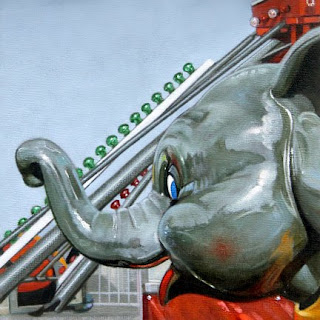 Dumbo Too | 6 x 6 | oil on panel
This carnival ride is such a treat to paint. First off it has that terrific shiny surface, and secondly it has that wonderful happy face. I'm already looking forward to painting it again in the future. To participate in the auction click here. 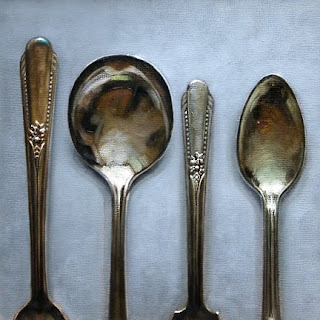 2 Up 2 Down | 6 x 6 | oil on panel
Four tarnished silver spoons. Nuff said. To participate in the auction click here.


Posted by James Neil Hollingsworth at 8:38 AM 3 comments 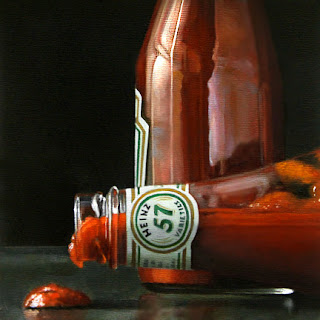 Heinz 57 | 6 x 6 | oil on panel
There's something about glass, and the color red. They really go well together. To participate in the auction click here.


Posted by James Neil Hollingsworth at 8:05 AM 3 comments 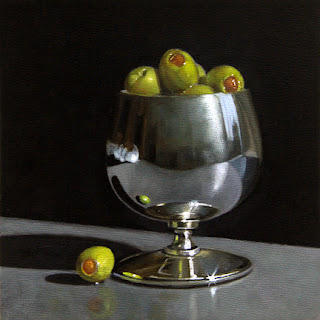 Olive Goblet | 6 x 6 | oil on panel
I'm back on ebay this week with five new paintings. I used to paint this little silver goblet a lot, but got away from it for a while, so I thought I'd bring it back. I don't know how the olives wound up there, but they really work. If you'd like to bid on this piece, you can access the auction by clicking here. 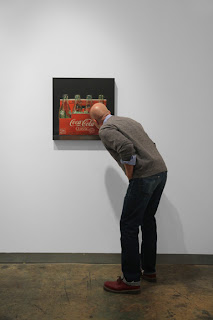 Otto Lange checking out my contribution
The (first) opening for the Coca Cola show was on Friday night. Mason Murer Fine Art organized the show for a meeting of Coca Cola's top 200 shareholders to be held later in October, but incorporated the Coke paintings into a larger show entitled Real Things which fills the bulk of the gallery. 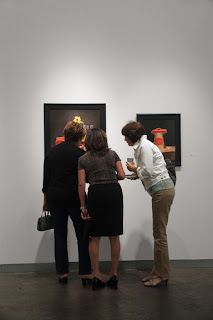 Gathered around Teresa Fischer's work.
The exhibition was particularly exciting for me because I was able to suggest a number of names to the gallery owner for inclusion in the show, and nearly all of them were able to contribute paintings. My intent wasn't completely altruistic, because I knew it would give me an opportunity to see, in person, the paintings of artists I admire. It's great viewing art on the internet, but it doesn't compare to seeing it in the flesh. 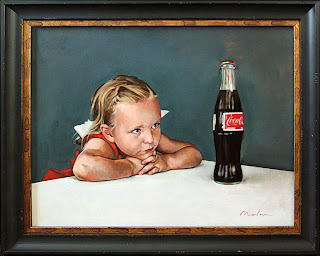 Coca Cola by David Malan
I don't mean to play favorites, because truly all of the paintings were wonderful, but I have to say that the painting Coca Cola by illustrator/artist David Malan was my pick for best of show. I've been a huge fan of his for years, and it was a real treat to finally see one of his pieces up close. 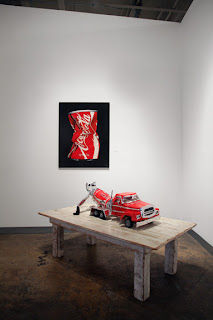 Otto Lange's crushed Coke can
Another artist I've admired for a long time, and one who was able to make it to the opening, is Otto Lange. His crushed Coke can was spectacular. It was really nice to have the chance to meet him, and talk shop for a good part of the evening. I have to say I've been very lucky in the last couple of months to have the opportunity to meet two of my favorite artists. First I meet Teresa Fischer (who has two paintings in the Coke show) in Cape Cod, and now Otto.
Other artist/colleague's, with an internet presence, that took part in the Coke show are: Alvin Richard, Vic Vicini, Chris Stott, Todd Ford, Sally Tharp and Jelaine Faunce. 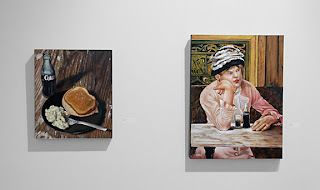 Mike Kasper
And last, but not least, two terrific paintings by one of my oldest, and best friends Mike Kasper. Mike is one of those people who seem to be able to do just about anything. A short list of titles I could apply to him would be; artist, sculptor, woodworker, engineer, welder, graphic designer . . .


Posted by James Neil Hollingsworth at 10:56 AM 4 comments 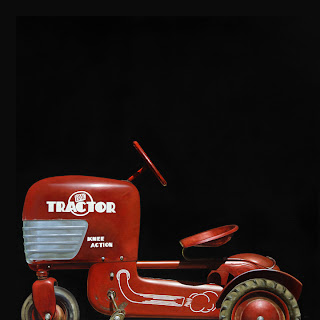 Tractor - 36 x 36 - oil on canvas
I can't believe it's almost been a year, but it's time again for the Elliot Fouts Gallery Realism Invitational in Sacramento. My plan, when I was first approached, was to do multiple paintings, but time got away from me, and I was only able to complete one. But . . . I think it's a good one.
I found this 1950's riding toy tractor at a local antiques store that allows me to rent items. It was sitting out in front of the shop, and I knew I had to paint it. That fantastic red, and those graphics were too much to resist. On a canvas size of 36 inches I think it is nearing 1:1 scale, close to life size.
There are a whole bunch of great realist painters represented this year, so if you're in the Sacramento area the evening of October 8th you should stop by and check out the show.

A Commission | A Re-list | and A Group Show 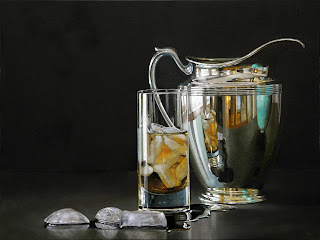 Pitcher with Ice No. 2 - 12 x 16 - oil on panel
I've been busy working on a commission these last couple of weeks, and it's finally finished. I've received more comments on a painting I did years ago called Pitcher with Ice than anything else I've ever done, and the client who commissioned this piece said they wanted something very similar to it. I've emailed them the image of the completed painting, and they are very happy. Whew, it's always a relief to hear that a client is happy with their painting. 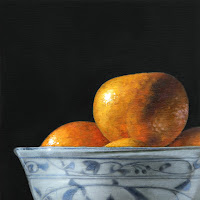 Clementines - 6 x 6 - oil on panel
These Clementines on the other hand met another fate. The winner of the auction decided they didn't want the painting after all, so I'm re-listing it once more on ebay. If you'd like to bid, you can access the auction by clicking here.
And finally, I'm working frantically to complete a larger painting (36 x 36) for a group show put on by the Elliot Fouts Gallery in Sacramento. It's an invitational realism show scheduled to open October 1st. They've got a long list of terrific realist painters participating, and I'm proud to be included with them. The only problem is that I have to get them the painting by the 23rd of September. Yikes! Back to work. 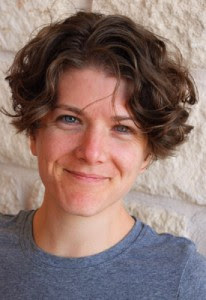 This is a shout out to help our good friend Carol Marine. Carol, her husband David and their son lost their home on Sunday when a fire swept through their subdivision near Bastrop Texas. According to reports, nearly 300 homes were destroyed. The good news is that they are safe.
Jennifer, a close family friend, has organized a fund to assist them immediately.
Please click here for details, and give what you can to help Carol, and her family get back on their feet.


Posted by James Neil Hollingsworth at 6:59 AM 0 comments