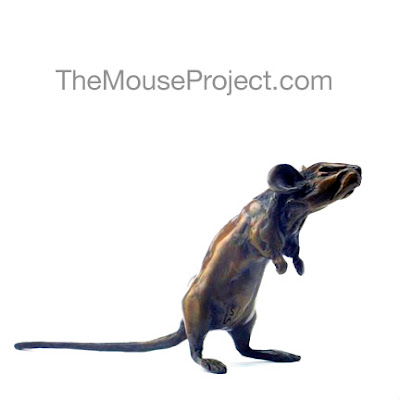 Some months ago, Steve Worthington contacted me to ask if I would be interested in participating in a project he was putting together to raise money to support animal shelters. Steve is a sculptor, working in bronze, and creates the most amazing animals. If you haven't been to his site, it's well worth a visit. I happily accepted his invitation along with 21 other artists. The task was to choose one of his mice, which Steve would then send to us, and we were to use it as the focus of a painting. These paintings would then be collected into a book, which would be sold, and the profits distributed to animal shelters. The project is now complete, the book is ready, but I'll let Steve describe the project in his own words. 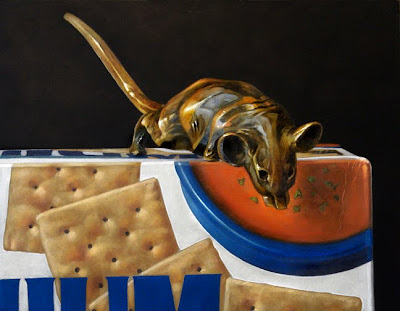 I never planned to call it that, people just started saying it, and so it stuck.

The mice in question are Sprightly, Nosey and Chubby: Three of the many bronze critters I've made. They've developed lives of their own, traveling across America, to Antarctica, Australia and populating plenty of places in between.

Not wanting the fun to end there, I decided to see if the best painters I could find online might be coaxed into painting them so I could curate a book and donate the profits to animal shelters. I thought I'd start by asking only the best, not really sure what kind of response to expect. To my utter delight and disbelief the answers came back with a resounding, "YES"! 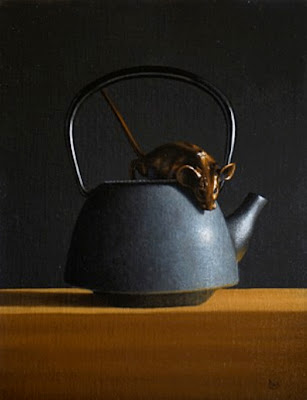 Top notch painter after top notch painter wanted in. So I dispatched a small army of mice to get their portraits painted! A PDF and a book are the end result. In the free PDF you’ll only find 22 lower resolution images (one per painter).

There are over 60 high resolution images of 47 original paintings by 22 painters in the actual book. Hopefully it will sell like hot cakes and make a bunch of money for animal shelters.

In the PDF there are links for you to be transported to the artists websites or blogs. 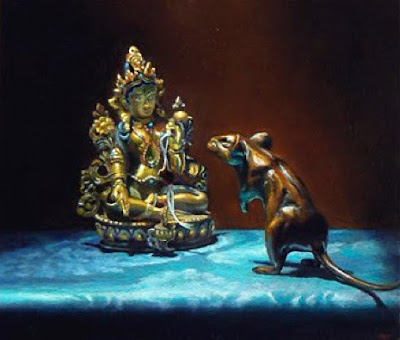 That’s why, in the real book, I recommend downloading the PDF as a companion. So you can treat yourself by visiting their web pages one click at a time.

Should you go to Lulu.com and then buy the real book, congratulations - and thanks! You're in for a treat, and you’ll be helping an animal shelter.

I really can't express my gratitude to everyone involved enough. They went all out, as you can see. Way beyond what I expected. 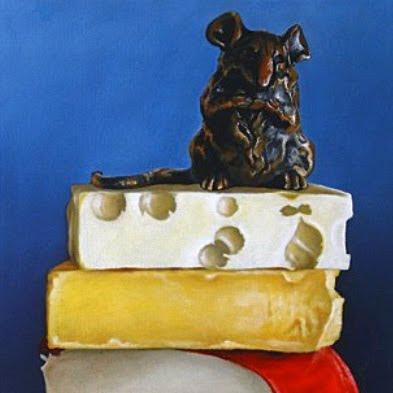 Jelaine Faunce
The images I've chosen above are a very small sampling of the total number of paintings in the book. I could have included many more, but didn't want to spoil the surprise. The book is 79 pages with more than 60 images, and sells for $49.45 with the profits going to support animal shelters. It was a fun project, for a great cause, and I was honored to be invited to participate. So, if you've got 50 bucks burning a hole in your pocket, picking up a copy (or two) of the Mouse Project would be money well spent. Murray Grey: Oil on canvas - 48 x 60
One of the many benefits of being married to an artist, is having someone in the house who can help you decide when a painting is finished. I've been working on this painting for a number of weeks now, had completed the third full pass, and was contemplating a fourth when Karen convinced me that the painting was done. It's hard to really see something that's so close, and after she worked on me for a while, I finally came to the realization that she was right, and I hung it on the wall to dry. 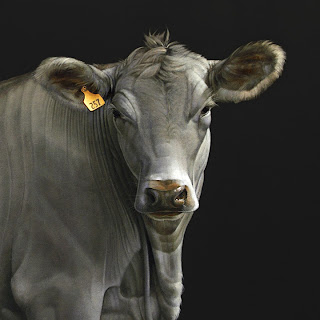 Murray Grey: Detail
When it has dried I'll be delivering it to Mason Murer Fine Art along with a another recent cow painting by Karen. It was a real challenge for me to work this large, but I think it helped get me past a self imposed size limit I'd adhered to for a long time. Now that I've done it, I don't think it will be so daunting to attempt another in the future. I was thinking of doing a painting of one of the aircraft I photographed at a recent airshow in a larger format. That could be very cool. 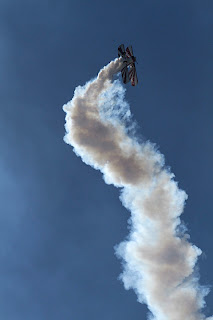 Gary Rower in his Stearman
Atlanta's biennial airshow was held this past weekend, and I got to Dobbins Air Force Base bright and early. My intent was to spend the entire day there, and that is exactly what I did. I've loved airplanes since I was a kid, and have spent time in and out of aviation throughout my adult life. In recent years, it's been time spent mostly out, so when the airshow comes to town, it's a welcome event.

B-25
My goal wasn't to just be an observer, but also to shoot some stock photography for potential paintings in the future. I've done a few paintings of aircraft in the past, and really have a hunger to try another. I was hoping there would be some bare metal planes on static display, because I love the shiny surface. I wasn't disappointed. There was a really nice B-25 on display, along with a beautiful DC-3, and a Twin Beech. 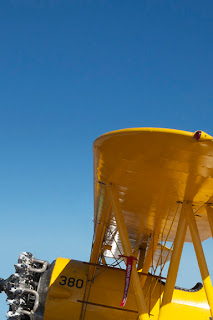 Stearman
Two years ago the promoters of the event drastically underestimated the number of people that would be attending the airshow, and they were basically overwhelmed. It was a mess, but this year they learned their lesson, and I have to say they handled the 200k that came beautifully. 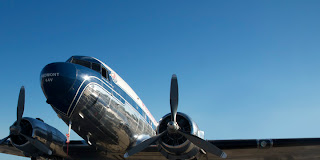 DC-3
The weather could have not been more perfect. A mild 76 degrees and "severe clear" skies. It was a great day. I haven't been at the controls of an aircraft since 1987 (man has it been that long), and it felt really good to be surrounded by so many planes and aviation enthusiasts. 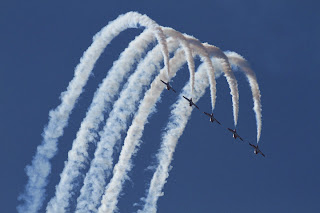 The Canadian Snowbirds
The Blue Angels were the headliners of the day, but I have to say, I was most excited about seeing the Canadian Snowbirds. I had never seen them before, and they put on a great performance. I know this doesn't have anything to do with art, but I just wanted to post about a wonderful day devoted to flight.
p.s. Still working on the cow. Just beginning to see some light at the end of the tunnel.


Posted by James Neil Hollingsworth at 9:58 AM 2 comments 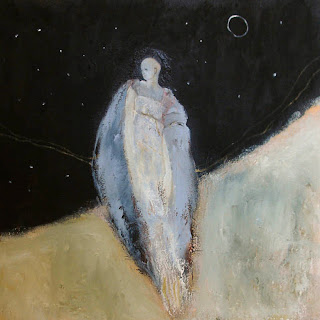 Perched: 18 x 18 oil on gallery wrapped canvas
I wanted to give my good friend Jeanie Tomanek a little promotional push, as she has just entered into the world of online art auctions. Jeanie's going to be auctioning some of her smaller works ebay, and "Perched" is her initial offering. Her etherial paintings with a feminine theme are engaging, and absolutely beautiful. Karen and I have been huge fans for years, and are fortunate to own a number of her works. If you'd like to bid on the painting above you can access her auction by clicking here. If you like what you see here, you should visit her website as well. If you're into social networkering, you can also follow her on FaceBook.


Posted by James Neil Hollingsworth at 9:42 AM 5 comments 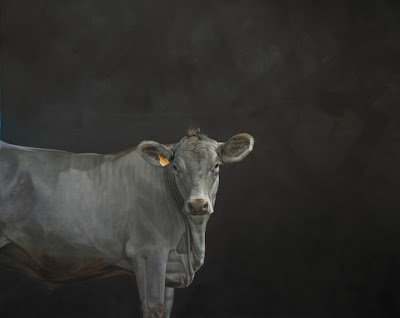 36 x 48 oil on canvas
I've got four more days into the Murray Grey. Sloooooow going. Still refining the structure and gradually adding in some color. I'm going to go ahead and call this the completion of the second pass. This piece will probably require at least four passes, and possibly five. I'll probably squeeze in another short round of ebay paintings before I begin the final pass. When I complete another significant portion of this painting, I'll post another image.
I also just received a brief email from Elliot Fouts regarding Saturday night's opening of The Still Life Show at his gallery in Sacramento. He was kind enough to let me know that PB&J No.10 had created a buzz, and that Dumbo had been put on layaway. Good news from my first exposure on the west coast. If you're reading this Elliot, I really appreciate your invitation to participate in a show with so many talented artists. 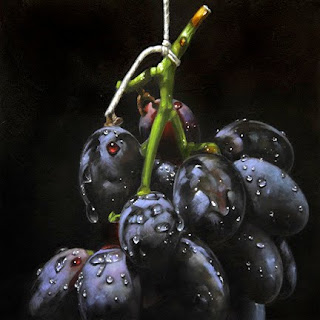 6 x 6 oil on hardboard panel
. . . and to complete the week, some grapes. These black grapes are great fun to paint, and even more so when you add some water droplets. Now it's back to the big bovine. A daunting task I must admit, but if I can pull if off, maybe a cool painting. The next couple of week will tell. If you'd like to bid on the painting above, you can access the auction by clicking here. 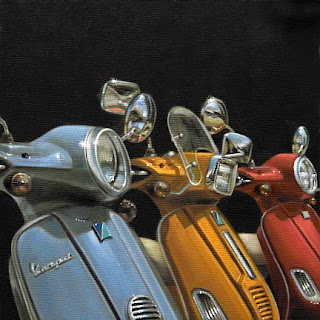 6 x 6 oil on hardboard panel
I don't usually choose favorites, but this may be my favorite painting going up this week. An absurd amount of time was spent working on it, but I really wanted to get it right, so I just kept going until it was "done". I had all of my tiniest brushes out for this one. I love the colors, and am already planning another version on a larger scale. Try to get even more detail out of the composition. If you'd like to bid on this painting you can take part in the auction by clicking here. 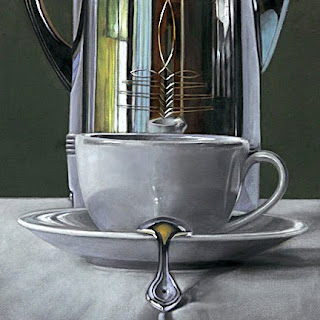 6 x 6 oil on hardboard panel
It wouldn't be a week of favorite themes without a percolator and coffee cup. If you'd like to bid on this painting you can take part in the auction by clicking here.